Here you’ll find common terms used on our pages. We’ve also included helpful graphics about navigating the immigration system and our services, and some reading and listening sources so you can learn more.

When the United States grants protection on its territory to individuals from another country who are fleeing persecution or serious danger. The protection allows them to remain in the U.S. without fear of deportation. Asylum includes non-refoulement permission to remain in the U.S. and humane treatment. In the U.S. you must be physically present in the States to file for asylum, and individuals have one year from arriving on U.S. soil (at any port or border point) to apply.

An individual who is seeking protection outside of their country. An asylum-seeker is someone whose asylum claim has not yet been decided on by the U.S. government. In the United States, as asylum-seekers wait for their status to be decided, they do not receive government benefits. Not every asylum-seeker will ultimately be recognized as a refugee, but every refugee was initially an asylum-seeker.

Someone who is granted asylum and is protected from being returned to their home country. In the United States, asylees are authorized to work, apply for a social security card, and travel internationally with permission. Asylees can also petition to bring family members to the U.S.

When people are forced to flee or to leave their homes or communities, particularly due to armed conflict, violence, human rights violations or natural or human-made disasters. Displacement can be within their home country, or if forced to flee internationally.

Depending on the immigration status of the petitioner, in the United States, certain family members are eligible for this specific petition and its complementary immigration status. For eligible refugees and asylees, this includes only spouses and children. U.S. citizens can petition for spouses, children, siblings, parents, and a fiancé.

Parole grants people who otherwise would be inadmissible or ineligible for admission into the United States the right to come to and remain in the U.S. for a specified temporary period of time. Parole is extended in response to urgent humanitarian situations or for a significant public benefit. In some cases, those with parole can apply for authorization to work, but no one with parole status is eligible for government or resettlement benefits unless otherwise federally granted (e.g., through an act of Congress Afghan nationals with parole status were eventually granted some resettlement benefits). Parole also does not confer immigration status; seeking asylum is the only pathway to permanent residency for many.

Someone who resides outside of their home country, typically by choice.

This is the cornerstone of refugee and asylum international law and human rights law. Non-refoulment prohibits countries from returning people to a country where there is risk of them being persecuted, placed in danger and/or subjected to violations of certain fundamental rights.

Lawful permanent residents (LPRs) hold green cards and are lawfully allowed to live permanently in the United States. There are no restrictions on employment, financial assistance, travel, etc. Eligible permanent residents can also apply to become a U.S. citizen. Application fees start at approximately $1,200. Refugees must apply for permanent resident status, by law, within one (1) year of being admitted into the U.S. with refugee status.

Introduced in 2018, the “Remain in Mexico” policy or Migrant Protection Protocols (MPP) requires asylum-seekers who pass their credible fear interviews to return to Mexico and wait in border towns – potentially without legal, health or humanitarian services - until their U.S. immigration court date. Average wait times for immigration court dates range from 1.5 years to 5 years. MPP applies to individuals who arrived in the United States by land via Mexico, but does not apply to Mexican nationals or citizens.

When refugees arrive in the country that agreed to admit and protect them. In most cases, there will be an opportunity to become naturalized citizens at some point.

A skill-development process where people of all ages learn to better understand thoughts and emotions, become more self-aware, and empathetic to help better problem solve and create positive relationships.

There are several specific categories that offer Special Immigration Visas (SIV) to Afghan and Iraqi nationals who worked for, or on behalf of, the U.S. military, contractors, government and in some cases the Afghanistan government and military. There are annual caps on how many SIVs are awarded. There is a $350 fee per application.

Temporary Protected Status (TPS) is a temporary legal status designated by the U.S. government to people fleeing from a specific country, typically due to violence, conflict, or other crises. The temporary protection prevents people from being deported back to these countries during the designated timeframe. TPS does not offer a way to automatically gain legal permanent residency nor does not confer any other immigration status or benefits. There is a first time $50 application fee.

Human trafficking involves the use of force, coercion or fraud to compel a person to provide labor, services or commercial sex against their will. Any commercial sex involving someone under the age of 18 is considered trafficking, regardless of force, coercion or fraud. Survivors of human trafficking can apply for a T nonimmigrant status, or T visa, which allows eligible individuals to remain in the U.S. for up to four (4) years without immigration status. The T-visa and certification allows for employment authorization, some government benefits and services, and eligible individuals may also be able to adjust their status to become permanent residents.

Children who are not in the company of parents, legal guardians or another adult caregiver in a situation of displacement, or specifically in this context, when arriving at U.S. borders.

What is the What?, Dave Eggers

And the Mountains Echoed, Khaled Hosseini

The Spirit Catches You and You Fall Down, Ann Fadiman

We Wish to Inform You That Tomorrow We Will Be Killed with Our Families, Philip Gourevitch

God Grew Tired of Us

Out of the Shadows 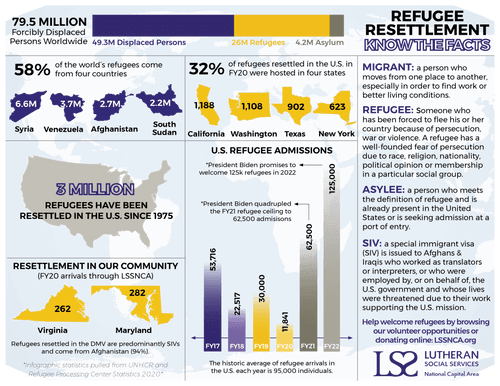 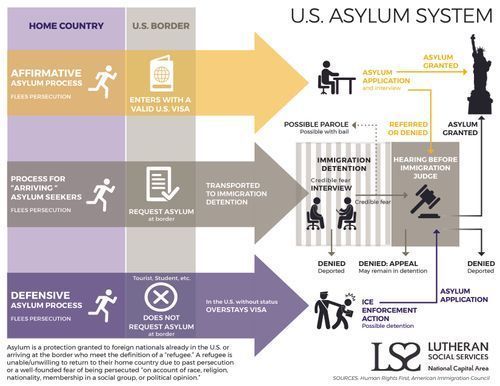 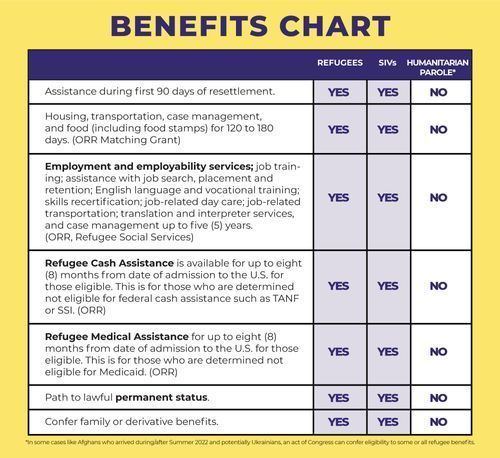 Advocate
Read Our Statements
Donate
Get Our Newsletter